Neural Pathway’s client William Bell-Caisley has raised over £1000 in support of NHS Charities Together, who are supporting NHS staff, volunteers and patients impacted by the COVID-19 crisis. William chose this charity, as he said that they are all heroes.

William has Cerebral Palsy and finds exercise challenging due to the effect this has on his posture and muscle strength. He often found walking and exercise caused him back pain and so he avoided these activities and would only walk short distances. His Physiotherapist worked on gradually increasing his general fitness levels by finding exercise that he could engage with and enjoy without worsening his pain. Until lock down he was attending the gym weekly where he worked on improving his walking pattern, his strength and posture as well as his overall fitness levels. Cycling on a static bike soon became one of his favourite forms of exercise.

His mother, Ruth, came up with idea of William’s fundraising efforts as she thought that it would be a way for him to engage with his Neural Pathways physiotherapist, Louise Humes, and to help him keep fit during the lockdown. With that in mind, Ruth set William the challenge of cycling 50 miles on his exercise bike at home. Given William’s physical limitations, it was hoped that he would complete around 6 – 8 miles a week, he has exceeded all expectations and completed the challenged quicker than was planned. Ruth says ‘as a family, we have always been proud of Williams efforts in his daily life. The effort and determination he put in for his fundraising was phenomenal and gave him something to focus on during lockdown. Even with a water infection that held him back 2 days he was straight back to it. The small community we live in has kept him going by sending donations and messages, he is our superstar!’. 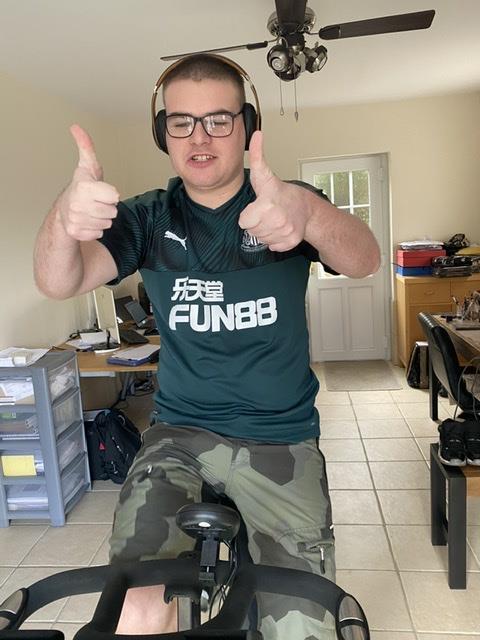 His efforts have been praised both by his case manager, Maureen Lindsay of UK Case Management, and by his solicitor Lauren Belk of Irwin Mitchell. Maureen has been really impressed by William’s achievements, she said ‘William has been so determined and focused, it has been such a pleasure to see him genuinely wanting to help others, whilst at the same time, meeting his own personal goals’ – likewise, Lauren has been amazed at his dedication in his endeavours, she stated “William is a real inspiration: it’s amazing to see that the fantastic work being done with his physiotherapist and wider team is paying dividends, not only for himself but also in his desire to give back to the community. Well done William – we are all very proud of you!”.

William’s neuro physiotherapist, Louise Humes, has been delighted to see his dedication and focus on completing his mammoth fundraising task, she commented ‘William has been so motivated by the thought of helping the NHS with his challenge. He has been inspired by others such as Captain Tom and Katie Price’s son Harvey, and he often wore a t-shirt that Harvey designed. Physiotherapy during lockdown has meant our sessions have been very different to usual but this challenge has really helped him to remain active during this time and I’m thrilled he hasn’t lost the fitness he has worked so hard to gain over the last few years. Our remote sessions have been via video call; they have been lots of fun, and even when he has been tired he has found inspiration to continue at a faster pace than I would have expected. Well done for keeping those legs moving William, you are a super star!’

On completing his fundraising mission, William said ‘I am is so grateful for everything the NHS is doing at the moment, I didn’t think I could do it but I did I am proud of myself’.  William and Ruth set the fundraising target at £500 and were amazed when the donations went over £1000 – the page is still open. If you want to donate and help support NHS Staff, NHS Volunteers and patients during this COVID-19 pandemic, please visit William’s Just Giving page: https://www.justgiving.com/fundraising/Ruth-Caisley2?utm_source=whatsapp&utm_medium=fundraising&utm_content=Ruth-Caisley2&utm_campaign=pfp-whatsapp&utm_term=92e3506912d94f9f9b7c0cd06adf1e62 ​​​​​​​